Not marking question as duplicate?

This question was asked earlier today. The accepted answer by the user "mathlove" was posted within minutes of asking. 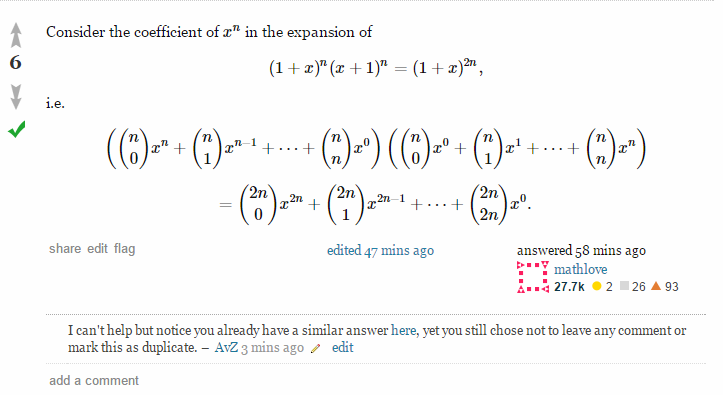 Now consider this question. The user "mathlove" also has a very similar answer here on an effectively identical question.

While it's totally plausible that the user forgot that they posted this answer earlier on this question (hell, I myself might have a few similar answers like this), but my (cynical) self says that they chose to ignore this on purpose to gain a little extra rep because of how similar the answers look.

My question is this, should we still post an answer regardless of the fact we already have an answer on a particular question if we know it to be duplicate? I personally feel it's wrong that we get a little extra rep from the same answers. What do you guys suggest?

Whether or not to vote is up to their judgment; nobody is obliged to cast votes of any kind. Abstaining is always an option.

Also a judgment call. They may disagree with the question being in fact a duplicate; there are subtle differences concerning proof verification questions, for one thing. They may think that the new instance of the question deserves a more detailed answer than the first one received (e.g., it appears that the hint given previously would not suffice for this case).

They don't give that reputation to themselves, it's generated by the votes of others. Perhaps the voters should consider whether upvoting answers to duplicates is a good idea. But it's their decision.

If you believe that it's wrong to post an answer to a known duplicate, then don't do it.

One instance where I would expect moderators to be involved is a user copy-pasting the same answer to multiple questions at the same time, after finding similar questions via search. This is something that happens on Stack Overflow, but fortunately not so much (or not at all) here.

Not the answer you're looking for? Browse other questions tagged discussion flagging etiquette answers exact-duplicates .

18
What is the etiquette for reposting one's own answer?

11
Should identical answers on questions which are abstract duplicates of each other be allowed?
17
About posting identical answers to a question
27
Allow closing as duplicate for new questions
3
Should I delete my answer if it is identical to others
4
What is the difference between voting to close as a duplicate and flagging as a duplicate?
18
Editing the problem by an answerer to "make" their answer "correct"
17
This question is an exact duplicate of: Page Not Found